Why old vine wines are so special

In all the winelands of the world, old vines get proudly mentioned on labels, and in many languages. Such is the value accorded to old vineyards and the wines they produce. But only in one country, South Africa, is it possible for that claim to be certified by the regulatory authority. Here, members of the Old Vine Project (OVP) can now put a Certified Heritage Vineyards seal on bottles of wine made from vineyards of 35 years or older, together with the planting date. This is a guarantee to the consumer of authentic wines grown according to the OVP viticultural and winemaking guidelines.

The OVP wants to focus the minds of winegrowers, winemakers and all wine drinkers on the benefits that come with age in vines. Old vines make wines with a unique character. Wines that reflect the vastness of our South African landscape – our harsh climate, our old and sometimes fragile soils and our complex culture. They reflect the decades of growing in one place, in the unyielding sun, the cold winter rain, the storms and winds, on a mountain, on a plain somewhere and then producing these delicate but powerful wines.

But what is it about wines from old vines that’s so special? Let’s explore some of the theories about aging vineyards and why they’re so rare.

Perhaps you spotted the words “old vines” printed on a bottle label. Or, maybe you heard some besotted crony at the local wine bar loudly profess a love for old vine Zinfandel. You can’t let a tasty option elude your palate, let’s figure out why these elderly grapevines are the real deal.

But first, are they?

How old do vines need to be to make good wine?

Here’s a brief lowdown on the lifecycle of a grapevine:

What’s interesting is that over the lifecycle of a grapevine there are some noted changes that give aging vineyards unique qualities:

Old vines tend to lose productivity with age. Many believe that this increases the concentration of the fruit and yields more concentrated wine.

This sounds nice but it also means that vines pull their nutrients and water sources from far below the surface. For this reason, older vines don’t suffer as much vintage variation and tend to be more draught/flood tolerant.

Caretakers of elderly vineyards tend to not need to do as much futzing (as long as the vines are healthy). Still, one must be very careful not to damage the vine!

The problem with old vines (if you can call it that) is reduced production. Less production means less money for a grape grower.

Additionally, older vineyards aren’t on trend; you’ll find them planted with oddball varieties like Petite Sirah, Trousseau, Zinfandel, and Carignan. This means a grape grower can’t charge a high price for their fruit. 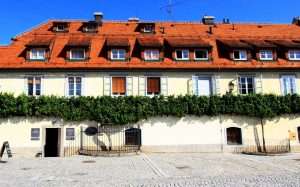 DID YOU KNOW: The oldest living grapevine, “Stara Trta,” grows in Moribar, Slovenia. The vine (pictured on the right) is a rare red Slovenian variety called Žametovka.

Other places with old vineyards

Fortunately, there are several regions that are known for old vine wines. These places are typically off-the-beaten path in areas where growers didn’t pull out vineyards to replace them with more “en vogue” varieties. Here are a couple of regions worth investigating!

Lodi is twice as large as Napa Valley with about 100,000 acres (40,500 hectares) of grapes. The region was an epicenter of grape production back in the late 1800s. You’ll find a lot of Zinfandel along with other unique varieties like Trousseau, Touriga Nacional and Tannat.

During the 1970s, Languedoc became known as “The Wine Lake” because of the overproduction, namely with the Carignan grape. It got so bad that wines produced in the area went directly to be distilled for fuel. The country instituted a large-scale grubbing-up regime, paying farmers to pull out their vines, and many did. Fortunately, the ones that didn’t still produce some of the best Carignan wines known to man!

South Australia is lucky enough to be so isolated that the Shiraz vines here haven’t been infected with phylloxera. This area is replete with ancient vineyards! In fact, it’s the only region in the world with an official “Old Vine Charter” – “Old Vine” (35+ years), “Survivor Vine” (75+ years) or “Centurion Vine” (100+ years).

Red wines aren’t the only type of wine to benefit from mature vineyards. On Santorini island you’ll find the rare Assyrtiko grape trained low to the ground into bizarre wreath-shaped vines. The best grapes are often used for a rare oaked version of the wine called “Nykteri,” which is not too dissimilar from fine white Burgundy.

Last Word: In With The Old

It’s easy to get caught up in the latest trends, whether they be in technology or health movements. But remember, it is useful to make an effort in preserving what’s worth keeping, even if it comes with a cost. After all, time is one of those things we can never get back.