The ten most ridiculous wine descriptors 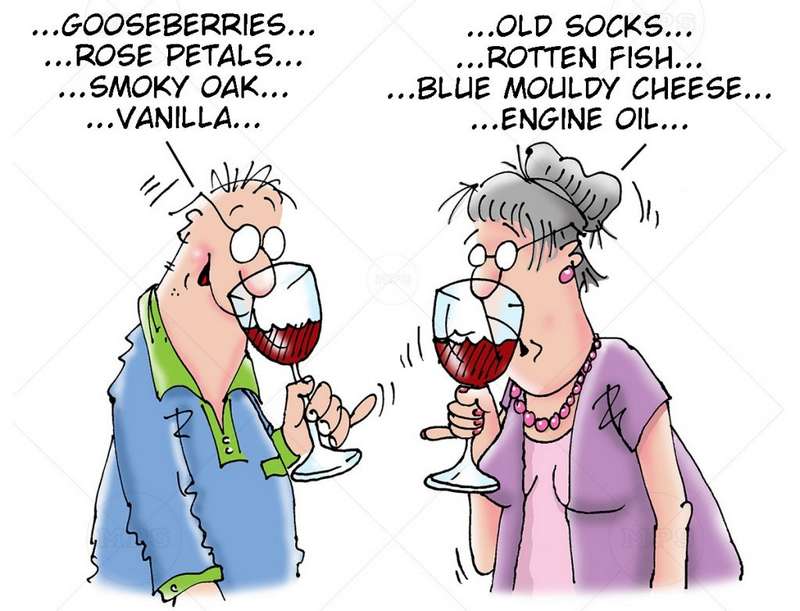 In the documentary SOMM, Ian Cauble describes a wine’s smell as “freshly cut garden hose and freshly opened can of tennis balls.” It seems absolutely ridiculous to think that wine can smell like either of those things. Can it? It got me thinking… what are some of the most ridiculous words and phrases that have been used to describe wine?

Love the smell of gasoline? Or maybe just a hint of it? Admit it, everyone does a little. If that’s you, then you may like aged Riesling, which often exhibits distinct petrol/gasoline notes on the nose. Some people love it, a lot of people hate it.

Imagine taking a hike in an old-growth forest. What’s that musty, funky, dense smell reminiscent of dirt-covered mushrooms? You got it, forest floor. This is most frequently used to describe Pinot Noir, especially from Burgundy and Oregon. If you want to get fancy and masquerade as a wine geek, use the French term, “sous bois.”

Who doesn’t like the smell of tobacco? High-quality Cabernet Sauvignon from Bordeaux and California often smell like fresh tobacco. Older wines aged in oak barrels and subsequently in the bottle can offer more mature notes of cigar box. Who doesn’t love the smell of a cigar box?

Another term for “sex in a bottle,” liquid Viagara is often used to describe opulent, flamboyant, modern wines with lots of ripe fruit, new oak, and high alcohol. These tend to be prohibitively expensive for the majority of us and often find their way into the glass of the plastic surgery crowd and rich bros who want to shamelessly showcase their wealth.

Gooseberries are the fruit of a bush thought to be native to Europe, Northwestern Africa, and parts of Asia. They can be bright green, red, or purple and look a lot like small grapes but are closely related to currants. The berries are often very unripe and sour. Gooseberries are commonly used to describe Sauvignon Blanc from New Zealand.

Sauvignon Blanc gets the distinction for contributing two of the ten descriptors in this article. But cat pee? Really? In addition to gooseberries, cat pee is a common aroma of Sauvignon Blanc, especially from more exotic locales like New Zealand and South Africa. It’s unmistakable and distinct. Even crazier? The world can’t get enough it.

Barnyard is in the same ballpark as forest floor but it adds a whole new level of funk. Think more compost and manure (animal feces) than earth and mushrooms. Some regard barnyard aromas as a fault but others, like myself, enjoy it in moderation.

Seems reasonable to think that wine would exhibit grape flavors? In reality though, high quality wine rarely tastes like unfermented grapes. If you want to experience the adult version of the sugar high that comes from chugging Concord grape juice as a kid, try drinking wines made from Niagara and Concord grapes, both of which are native to North America. Wines made from those grapes are usually terrible though, so if you want to keep it classy and experience high quality grapey flavors, try Gewurztraminer from Alsace or Bobal from Spain.

Do you remember the days before iPhones and tablets when normal pencils required sharpening? Think about the smell of those freshly shaved pencil shavings on the desk. Believe it or not, some find that same smell in select red wines. High quality Cabernet-based wines are often described as having hints of pencil shavings, especially examples from the Paulliac region in Bordeaux. Think of it as a blend of graphite and wood. Similar descriptors that often get interchanged with it are cedar, flint, mineral, and gun metal.

This is the only wine descriptor on this list that is 99% guaranteed to indicate a flaw in the wine. Wet dog is often used to describe the damp, musty, moldy smell that comes from a “corked” wine. The smell is caused by bad chemicals… the 2,4,6-trichloroanisole (TCA) and 2,4,6-tribromoanisole(TBA) chemicals to be exact. While most of the aromas and tastes listed above are enjoyed by some people, wet dog is never preferred and is always a sign that you should return the bottle.