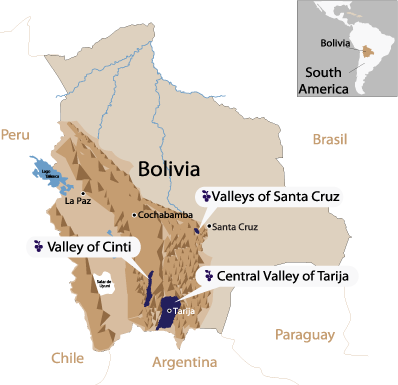 Facing the titans of Argentina, Brazil and Chile, Bolivia undoubtedly has a battle on its hands when it comes to export markets, but to be fair, wine has only been produced in Bolivia for 400 years or so!

Almost all of Bolivia’s vineyards are located between 1 600 and 3 000 metres above sea level. Indeed, Bolivia may very well be the country with the highest vineyard surface in the world. These lofty altitudes provide high UV exposure and wide ranging diurnal temperatures, giving deep coloured but fresh wines with ripe tannins and high acidity. These wines have very appropriately been given the name High Altitude Wines. 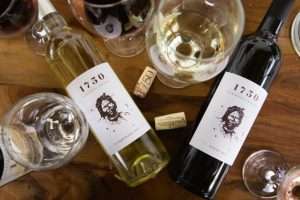 On a recent visit to Bolivia and with the help and guidance of the Wines of Bolivia Association, I visited two of Bolivia’s most extensive wine producing regions, the Central Valley of Tarija (El Valle de la Concepción) with some 2 400 hectares of vineyards mostly south of the tranquil colonial town of Tarija, and the popular tourist spot of Samaipata (Valleys of Santa Cruz) with 100 hectares of vineyards, a 2-3 hour drive from Santa Cruz de la Sierra.

The main varieties planted in the central Valley of Tarija are Cabernet Sauvignon, Syrah, Merlot, Malbec, Tannat, Garnacha and Barbera in reds, and Muscat of Alexandria, Sauvignon Blanc, Riesling, Colombard and Chenin Blanc in whites.

Currently there are up to 300 ha planted, but there is potential to plant as many as 10 000 ha especially around Vallegrande, well-known by Che Guevara pilgrims. Our destination was to be the Uvairenda winery located close to the touristic town of Samaipata (a two and a half hour drive from Santa Cruz de la Sierra) in the foothills of the Cordillera Oriental. 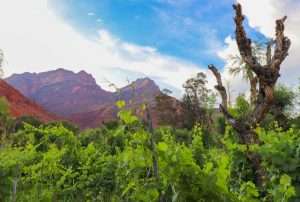 Bolivia’s wine history began nearly 500 years ago when the Spanish pushed to expand their empire into the New World. They arrived in the territory that is now Bolivia from the west through Peru, and from the east through Argentina.

Wherever the Spanish settled, they attempted to plant grapevines – including Bolivia. Although there were some early challenges, there’s a thriving production of wine in Bolivia today throughout the wine valleys of Tarija, Cinti and Santa Cruz.

Bolivia provided many challenges to the first vignerons, the most significant of which is that the country lies entirely within tropical latitudes. Grape vines, a Mediterranean plant, do not produce good fruit when grown in tropical environments, but through trial and error the Spanish found success by planting vines in high altitude valleys. Above 1,500 meters elevation (4,921 feet) colonists were able to find climates that were more suitable for the vine, and here they planted Criolla varieties – grapevines of Negra Criolla (aka Mission, País, Criolla Chica) and Muscat of Alexandria.

As the name implies, Mission grapes travelled throughout North and South America with the Spanish Missionaries. This black grape variety has hardy vines that can adapt well to a wide variety of environments.

Muscat of Alexandria was also a favourite of Spaniards for its intensely aromatic fruit, high yields and resilience to pests and diseases. 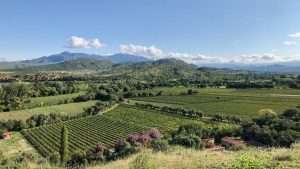 Modern day wine production in Bolivia is changing by the season, but many vineyards still look much like they did centuries ago. Bolivia is home to some extremely old vines, especially in the traditional growing region of the Cinti Valley. Winemaking and viticulture have taken large steps forward in the last several decades, with modern winemaking equipment and knowledge first arriving to the country in the 1960s and 1970s.

Most of Bolivia’s 3,000 hectares of vineyards (7,500 acres) is planted with Muscat of Alexandria, though relatively few Muscat grapes are made into table wines. Most of this production is made into wine that will be later distilled into singani, Bolivia’s traditional Muscat of Alexandria brandy. This aromatic, 40% spirit represents the aromatic intensity of the Muscat grape and is typically enjoyed mixed with ginger ale or local fruit juices.

Since the 1990s, Bolivian winemakers have been experimenting with planting different grape varieties, focusing their attention toward red grape varietals that could be well suited to the high altitude terroir. With vineyards at elevations ranging from 1,500-2,800 meters above sea level (4921-9,186 feet), thin-skinned varietals typically can’t handle the increased UV exposure. Success has been found with lesser-known French and Spanish varietals, as well as some modern crossings. Though new plantings are gaining a lot of attention, traditional varietals like those brought by the Spanish exhibit lots of potential, but winemakers still have some work to do in order to create styles that will be appreciated internationally.