Johann Crafford on December 7, 2017 under Travel/Reis 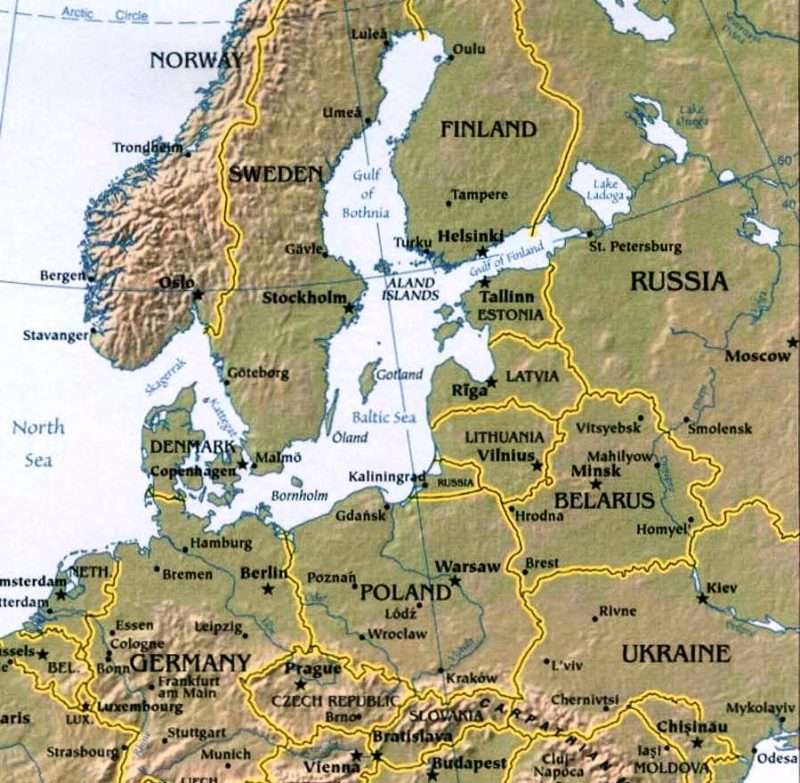 You know you are going to find great food and fine wine in the south of Europe! After all, this is the region of France, Italy, Spain, Portugal and others that have become synonymous with great gastronomy and oenology. But what about further to the north, much further in fact?

Well, on a recent tour of “the Northern Capitals of Europe and Russia” – Prague, Berlin, Copenhagen, Stockholm, Helsinki, St Petersburg, Moscow, Minsk, Vilnius and Warsaw – we set out to discover what these countries have to offer in terms of food and wine. What we discovered, was interesting as well as disappointing. Interesting in so far as most traditional dishes can generally be described as wholesome peasant food consisting of meat, potatoes and cabbage, while some wine offerings were good and others were forgettable. Disappointing because the only two South African wine brands we discovered in all these cities were Kleine Zalze and Zonnebloem. Hopefully there are more and we just missed them, but one thing’s for sure, Wines of South Africa (WOSA) have their work cut out for them.

Let’s kick off with the first four capitals we visited, Prague, Berlin, Copenhagen and Stockholm. We’ll look at the last five in a follow-up article.

Our trip kicked off in the Czech Republic, in its capital. When I spoke to the manager of one of Prague’s best restaurants situated in the historic old section of the city, he complained that customers more often than not opted for foreign wines as they did not understand Czech wines. It was obvious that he believed Czech wines deserved more attention, and I agree!

Incidentally, the two major wine regions in the Czech Republic are Bohemia and Moravia, the latter being “number 1”!

Through Google we discovered that pork or beef with dumplings were very traditional Czech dishes, as well as duck and dumplings. So I thought I’d give both a try, on separate occasions of course!

During a walking tour off the old city, we stopped off at a very traditional Czech restaurant where I indulged my taste buds with Old Prague Pork and Potato Dumplings. The waiter suggested I try the Kubik vinařsti Modrý Portugal 2015 Classic with it, and this dry, elegant and fruity red wine certainly did the trick. I hails from Moravia and has an alcohol content of 12,5% per volume.

The following day we tried a restaurant close to our hotel in the old city where I again indulged my palate, this time with Duck and Potato Dumplings served with a delicious sauce and a Château Valtice Sauvignon 2016. Again, neither the food nor the wine disappointed. The latter was crisp with lovely lemon zest flavours and offered good acidity and balance on the palate.

Incidentally, the family-owned and run Châteaux Valtice is located in the Moravia wine region of the Czech Republic and one of the country’s oldest wineries. It has been operating under the direction of Antonín Št’astný and his sons, Mark and David. With its character, focus and size, the company corresponds to a medium-sized producer of the French Château type and is at the same time the largest wine producer in the country. It specializes in the production of premium wines under the Château Valtice label.

From Prague we flew to Berlin. German wine is primarily produced in the southwest of the country, along the river

Rhine and its tributaries, with the oldest plantations going back to the Roman era. Approximately 60 percent of the German wine production is situated in the federal state of Rhineland-Palatinate, where 6 of the 13 regions (Anbaugebiete) for quality wine are situated. White wine accounts for almost two-thirds of the country’s total production of about 9 million hectolitres (1,2 billion bottles) annually.

As a wine country, Germany has a mixed reputation internationally. Among enthusiasts, the country’s reputation is primarily based on wines made from the Riesling grape variety, which at its best is used for aromatic, fruity and elegant white wines that range from very crisp and dry to well-balanced, sweet and of enormous aromatic concentration. While

primarily a white wine country, red wine production surged in the 1990s and early 2000s, primarily fuelled by domestic demand, and the proportion of the German vineyards devoted to the cultivation of dark-skinned grape varieties has now stabilized at slightly more than a third of the total surface. For the red wines, Spätburgender, the domestic name for Pinot Noir, is in the lead. Another popular variety for reds is Dornfelder.

Perhaps the most distinctive characteristic of German wines is the high level of acidity in them, caused both by the lesser ripeness in a northerly climate and by the selection of grapes such as Riesling which retain acidity, even at high ripeness levels.

On previous visits, I discovered that German cuisine was quite to my liking, especially their spätzle (a traditional Swabian egg noodle dish), bratwurst, schnitzel and eisbein und sauerkraut. This time around we fitted in some delicious currywurst and sauerbraten, both at restaurants in Berlin. 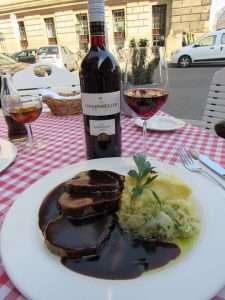 The Lergenmüller Spätburgunder 2015, a very typical pinot noir boasting elegant cherry flavours with a hint of spicy oak, was my liquid partner to a wonderful plate of sauerbraten at a restaurant (pictured right) spitting distance from Checkpoint Charlie.

We took the road to Rostock from where we sailed by ferry to Copenhagen, capital of Denmark. Despite its northerly location, Denmark has been fostering a developing wine industry since the

late 20th century that has benefited from global warming and the legalization of wine production in 1999. Today there are small vineyards in Jutland, Lolland, Funen and Northern Zealand growing various wine grape varieties, mainly Cabernet Cortis and Cabernet Cantor (below right). 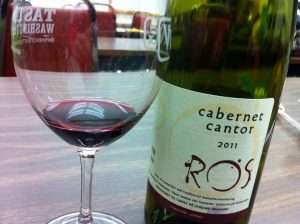 In 2006 the twenty vineyards in the country together produced around 40,000 bottles of wine. In 2007, Danish wine gained prominence when a 2006 Dons Cuvée sparkling wine from Skæresøgård Vin won a silver medal at the 2007 Effervescents du Monde!

If restaurateurs in the Czech Republic believe they have problems with locals more often than not opting for foreign wines as they do not understand local wines, their counterparts in Denmark have it even worse. Even waiters know very little about Danish wines. As a matter of fact, we discovered they know very little about any wine! So I had my traditional dish of pork belly and potatoes with a local beer!

After another short ferry ride, we ended up in the south of Sweden from where we hit the road to its capital, Stockholm. Our drive took us past the impressive Lake Vattern where we stopped for lunch at a small roadside restaurant. Here I had traditional meatballs and potatoes, served with a deliciously sweet berry sauce, and “paired” with a merlot from France as the waiter had no idea when I asked about local wine!

Swedish wine, in terms of wine produced commercially from grapes grown in the country, is a very marginal but growing industry which saw its first beginnings in the late 1990s.

In its less strict usage, the term “Swedish wine” has also been applied to fruit wine from Sweden, which has a very long tradition, and wine produced in Sweden from imported grape juice, which goes back longer than actual viticulture in Sweden.

Sweden is well north of the area where the European vine Vitis vinifera occurs naturally and there is no tradition of wine production from grapes in the country. Some sources claim that some monastic vineyards were established when the Roman Catholic Church established monasteries in Sweden in Medievel times when Sweden’s climate was milder, but traces of this supposed viticulture are much less evident than the corresponding activities in England, for example.

Small-scale growing of grapes in Swedish orangeries and other greenhouses have occurred for a long time, but the purpose of such plantations were either to provide fruit (grapes) or for decoration or exhibition purposes, and not to provide grapes for wine production.

Perhaps surprisingly, the first two wineries of some size were not established in the far south of Sweden, but in Södermanland County close to Flen (in an

area where orchards were common), and on the island of Gotland, which has the largest number of sunshine hours in Sweden. Later expansions have mostly taken place in Scania though.

There are also small-scale viticulturalists who grow their grapes in greenhouses rather than in the open. Small quantities of a few commercial wines made their way into the market via Systembolagetfrom the early 2000s.

Only a handful of Swedish producers can be considered to be commercial operations, rather than hobby wine makers. In 2006, the Swedish Board of Agriculture counted four Swedish companies that commercialized wine produced from their own vineyards. The total production was 5 617 liters, of which 3 632 liters were red and 1 985 liter white, and this amount was produced from around 10 hectares of vineyards.

The Association of Swedish wine growers estimates 30-40 vinegrowing establishments in Scania, but this number includes hobby growers with a fraction of a hectare of vineyards.

Well, that’s it for the first part of our recent trip. Next time I’ll tell of our hunt for food and wine in Finland, Russia, Belarus, Lithuania and Poland.