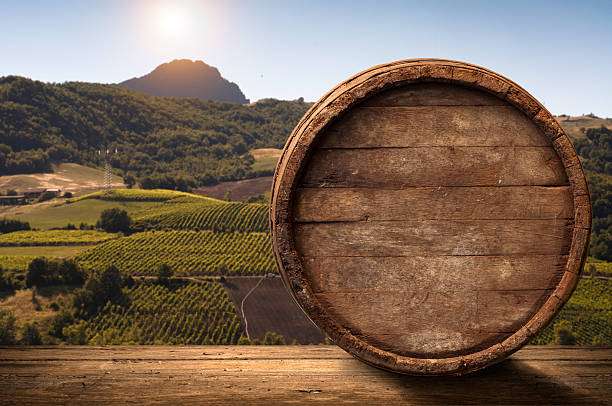 The maturation of wine in barrels has been a customary practice for many years. The wooden barrels are responsible for certain important reactions that occur in the wine during maturation. These reactions cause changes in the wine’s colour, flavour, taste and stability. If the winemaker uses the right choice of barrel for a certain style of wine, these reactions are able to improve the quality of the wine.

During the production process of wooden barrels, certain chemical changes take place in the wood which may drastically influence the composition and characteristics of the wood.

We’re going to look at some of these changes and how they may influence the wood and eventually the composition of the wine.

Types and Origin of Wood 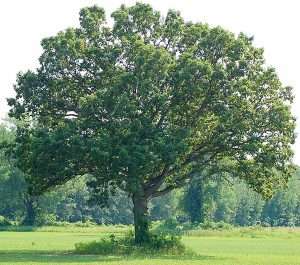 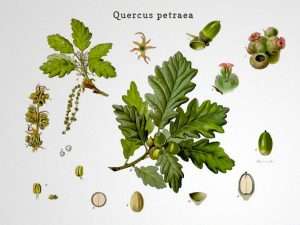 In the past, various types of wood have been used and tested with a view to storing wine. Suitable types of wood should impart flavours and tastes that complement the quality of the wine rather than imparting undesirable flavours to the wine. They must also be durable and should not leak.

Some of the different types of wood that have been tested include white oak, red oak, chestnut, gum, maple, beech, ash, pine, Cape beech, redwood, acacia and stringy bark. The oak (Quercus sp) has been found to be the most suitable for this purpose.

In France especially, a large industry has developed around the production of oak barrels. About a quarter of France’s surface is covered with national forests of which oak plantings comprise 30 to 40%. The species that occur in these French regions are Quercus robur, Quercus pedonculata, Quercus petraea and Quercus sessilis. 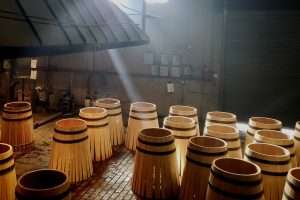 It is possible to distinguish between some of the species. Quercus petraea, for example, has leaves with long petioles and acorns with green stalks. Quercus robur has short petioles and acorns with long stalks. Quercus robur and Quercus pedonculata are prevalent in Limousin and Burgundy. In central France and the Vosges regions one finds Quercus petraea and Quercus sessilis. French oaks are therefore named after their region/forest of origin, e.g. Nevers, Limousin, Alliers, Troncais, etc.

American oak (Quercus alba) is also commonly used for the production of wooden barrels. Oak forests occur in Missouri, Ohio, Illinois and Wisconsin. Oregan oak, which is grown in the state of Oregan, is also used for this purpose.

The origin of the wood has an influence on the quality of the wood. Quercus robur and Quercus pedonculata have a high polyphenol content and lower aromatic components. Quercus petraea and Quercus sessilis, on the other hand, have lower levels of extractable ellagitannins and are aromatic. 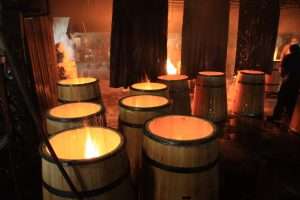 On the whole, American wood has lower levels of phenols and higher levels of aromatic flavourants. This is especially so in the case of á-methyl-g-octalactone (the so-called oak or whisky lactone) which imparts the characteristic woody and coconut flavours to wine. Vanillin (vanilla flavour) is also more prominent in American wood than in French wood. Eugenol (with a clove character) is slightly higher in French wood, especially in central France. Other flavourants such as vanillin acid, sinapaldehyde and coniferaldehyde are also higher in American oak.

French oak has higher levels of non-volatile components, especially phenolic compounds. Wood from Limousin, in particular, has the highest extract and extractable polyphenols. In wood from this region, double the amount of total extract, ellagitennins and catechin tannins was measured than in wood from central France and American wood.

Second-fill barrels have shown, however, that wood from Limousin did not impart much more phenolic components to wine than American wood. The greater measure of extract obtained from wood from Limousin, for example, could contribute to a greater concentration of colour, although research in the US has shown that there are hardly any differences in colour in shiraz and pinotage matured in French, Russian or American barrels. 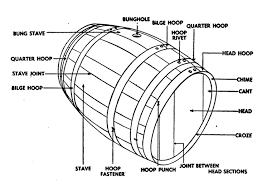 The grain of the wood could also play a role. It is the cambium part of the tree that gives rise to the phloem and xyleme. In due course the xyleme hardens and in the process changes to the so-called pith wood from which the barrel is made. The wood also grows differently depending on the season. Spring wood has bigger ducts than summer wood, the latter being darker and harder. The ducts in the spring wood make it more flexible, but also porous. Tylosis closes off the ducts in winter, but in spring they open again for circulation. Without the tylosis, the wine would leak from the end of the dowels. The grain is therefore classified according to the size and regularity of the annual growth rings. These are especially influenced by the growing season of the wood and origin.

Wide grain wood is richer in dry extract and ellagitannins, while wood with a tighter grain contains more wood lactones and eugenol; these are similarly conveyed to the wine. Wood can also differ in its chemical composition as a result of differences in the growth rate and age of the wood. The oldest pith wood has the least ellagitannins, while rapidly growing summer wood has wide annual rings (wide grain) and therefore more ellagitannins.

It is therefore obvious that origin and grain are an integral part of the wood’s composition  and the eventual characteristics imparted to the wine. It should also be borne in mind, however, that differences may occur in barrels from the same wood. Differences have even be found  in barrels from the same tree and it is therefore very important for the winemaker to have a reliable cooper who will eliminate these differences through good coopering practices. The cooper can also subject the wood to different treatments  that will change its characteristics.

Next time we’ll be looking at the influence of wood-ageing.