Exploring the gastronomic jewels on the ‘Country Roads of France’

Johann Crafford on October 18, 2018 under Travel/Reis 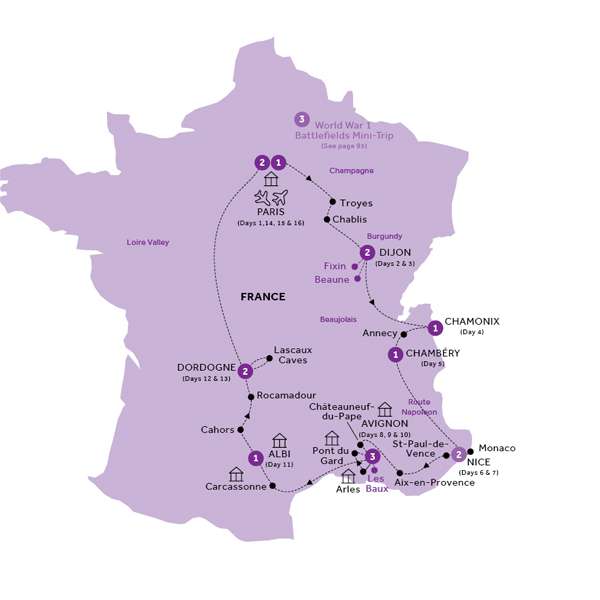 France is the most visited country on earth, according to statistics, with over 80 million tourists every year. And they expect this figure to hit 100 million by 2020! One understands why once you’ve been to this neck of the European woods. It’s about the country’s rich cultural heritage and history, it’s about its natural beauty, it’s about its culinary delights, it’s about its wine … and so I can go on.

Our most recent trip to France started in Paris, where else, and included the wine producing regions of Champagne, Burgundy, Provence, the Rhône and Languedoc, while we skirted Bordeaux.

We left “The City of Love” for Troyes (famous for its magnificent core of medieval buildings appropriately shaped like a Champagne cork) in the Champagne region, hoping to be treated to some bubbly and fresh oysters … or foie gras on melba toast. Sadly, it was not on the itinerary, but I did manage to slip in a few glasses of “very expensive” Première Champagne Bauser Les Riceys Brut made from 100% pinot noir grapes. (I will definitely take this oversight up with the tour operator!)

The Bauser family has been making Champagne in Les Riceys for generations. Incidentally, Les Riceys is the only place in Champagne to have three AOC wine awards: Champagne, Rosé des Riceys and Coteaux Champenois.

But back to Champagne. Lying to the east of Paris, the region is one of the great historic provinces of France. As far back as the times of the Emperor Charlemagne, in the ninth century, Champagne was one of the great regions of Europe, a rich agricultural area that was famous for its fairs. Today, thanks to a type of sparkling wine to which the region has given its name, the word Champagne is known worldwide – even if many of those who know the drink do not know exactly where it comes from.

But Champagne was not actually invented in the region. According to legend, it was monks who brought the method for making sparkling wine up from the Languedoc in the south of France, but they soon discovered that the chalky soil and climatic conditions in the Champagne region produced a bright bubbly wine that was in many people’s opinion better than the sparkling wines produced further south. There is no region in France – perhaps no other region in the world – whose name has been made so famous by a local product.

After the brief stop, we continued to Burgundy where the work of winegrowers over 2 000 years has created a vineyard landscape that is chiselled into a mosaic of over 1 000 different Climats, terroirs, each bearing a specific name, and which is now part of the prestigious UNESCO World Heritage List. Burgundy is also called “the birthplace of terroir-based viticulture”.

And if you’re wondering, Climats is the Burgundian expression of the notion of terroir. Climats are precisely delimited plots of land that enjoy particular geological and climatic conditions, and classed under different categories of appellations, namely Regional, Village, Premier Cru and Grand Cru.

We stopped in the quiet village of Chablis which gives its name to one of the most famous French wines, also known as chardonnay. Here we were introduced to four different styles of chardonnay … sorry, Chablis! … at La Cave du Connaisseur (the cellar of the connector) in a cellar that dates back to the 13th Century, in the Yonne, a French “department” named after the river of the same name. Yonne is one of 8 constituent “departments” of Bourgogne-France-Comté and is located in the northwest of the region bordering Île-de-France. It was created in 1790 during the French Revolution. Its prefecture is Auxerre.

The Cave du Connaisseur is a unique place, steeped in history, where one finds a wide range of Chablis wines vinified by Matthieu Antunes in the purest tradition, reflecting the typical minerality of the terroir of Chablis. But it’s not only Chablis one finds here, although that’s all we tasted that day. They also produce reds and rosé, and even a bubbly called Crémant de Bourgogne.

Crémant is a group of sparkling wines made with the same technique as Champagne, but from outside the Champagne region. It employs labour-intensive secondary bottle fermentation as does Champagne. There are a wide variety of styles to choose from as Crémant is made in eight different appellations throughout France.

From here the country roads took us to the Burgundian capital of Dijon, whose many handsome buildings recall a time when the Dukes of Burgundy were more powerful than the Kings of France! We visited a boutique winery, Clos St-Louis, near the village of Fixin not far from Dijon. Incidentally, a clos corresponds to a Climat surrounded by walls. In the Middle Ages the clos belonged to prestigious owners or the monasteries. Nowadays a clos may be shared between several owners.

At Clos St-Louis the charismatic Philippe Bernard has established himself (lately with the help of his daughter Virginie, representing the 5th generation) as a producer of fine wine. After a visit to the vineyards and the production and barrel cellars, Phillipe took us to the “old vault” for a tasting of their excellent wines, starting with white, then onto rosé and finally the coup de grace, his pinot noirs. This was followed by a traditional farm-style dinner with the family, accompanied by their fine wines, which included their Crémant de Bourgogne Brut.

The estate has 19 hectares of vines owned or farmed in the Burgundy, Marsannay, Fixin, Côte de Nuits and Gevrey Chambertin appellations. In accordance with the specifications of the appellation, the vineyards are planted with a single grape variety, pinot noir for red wines (90% of the appellation) and chardonnay for white wines.

Incidentally, Burgundy remains the absolute benchmark for wines made from chardonnay (46% of plantings) and pinot noir (36%). Some wines are also made from gamay (7,5%), a red variety, and aligoté (6%), a white variety. Most Burgundian wines are single-varietal.

The road to our next “wine stop” took us to Chamonix in the Alps, lakeside Annecy and Chambéry, from where more glorious mountain scenery was ours to enjoy as we travelled along the spectacular route used by the Emperor Napoleon when he returned from his first exile to try and retake the throne of France all the way to the French Riviera, Nice, Monaco and the Côte d’Azur, and, of course, picturesque Provence.

Rosé has been the focus of Provence wine-making for centuries and today accounts for about 75% of the region’s wine production. Ever since the Greeks brought wine to the area in 600

BC, the people of Provence have focused on the art of dry rosé production, and the region isn’t only the site of the country’s oldest vineyards, but also the world’s largest wine region specializing in rosé.

Driving through Avignon, we took the winding road into the heart of the world-famous Châteauneuf-du-Pape (New Chateau of the Pope) region, to Maison Bouachon.

“A barrel-maker born in Châteauneuf-du-Pape will eventually think of filling his barrels.” It came as no surprise then when the Bouachon family, barrel-makers who had already been selecting grapes to produce wine for others, decided to fill their own barrels in 1898. Maison Bouachon, the winery, was born.

1893. At that time someone had the idea to plant a small vineyard where “excellent wines were harvested”. This delicate nectar was known as the Pope’s wine, its prestigious name before becoming the internationally acclaimed Châteauneuf-du-Pape. The Châteauneuf-du-Pape Controlled Appellation was created in 1933, defining the production area and conditions.

Located on the left bank of the Rhône River, between Avignon and Orange, the vineyards of Châteauneuf-du-Pape cover some 3 200 hectares and consists of 13 varieties, 8 red and 5 white. The reds are grenache, syrah,

It is often said that Grenache, the mighty grape of the southern Rhône Valley and the major constituent of these wines, shapes the spirit of Châteauneuf-du-Pape wines.

Arles, Carcassonne, Albi and Cahors followed. In Cahors we stopped for me to sample the so-called “Black Wine” of Cahors, which is actually a red wine that derives its “black wine” label from it’s dark, inky colour. Cahors is not only a small town on the Lot River, but it also lends its name to the red wine region in southwestern France that is the ancestral home of the malbec grape. Cahors is made from malbec, either 100% or blended with a small amount of merlot or tannat (usually).

Cahors has a fascinating but somewhat turbulent history. The vineyards were among the first planted in France by the Roman Emperors, more than two thousand years ago, and they were an immediate hit. However, as the Empire grew, it became abundantly clear that production of wheat would need to be stepped up in order to feed the growing masses. France was to be the breadbasket of the Roman Empire and the vines, splendid though they were, would have to go. In the third century, one of the more discerning Emperors, Probus, decided that enough was enough and the time had come to reinstate the delicious red wine. He is still a much-celebrated figure in winemaking circles today, and one of the distinguished Chateaux of the region has a rather splendid red wine named Prince Probus in his honour.

In 1971 the French government decided to recognise this black jewel in their non-existent crown by awarding the region AOC status. Since then there has been no looking back. There are still only 4 000 hectares laid to vine in the area permitted by AOC standards, which makes Cahors a comparatively rare French wine.

Well, all good things come to an end, unfortunately, and after two days in Sarlat, during which time we took a cruise on the Dordogne River along the “Valley of the Châteaux” on a traditional boat known as a gabarre, we returned to the “City of Lights”. In fact, it wasn’t “the end of all good things” for us as we were heading off to Switzerland the very next day for some more food and wine exploration, among other things!