Discovering Turkey’s many wine (and other) delights!

Johann Crafford on June 11, 2019 under Travel/Reis 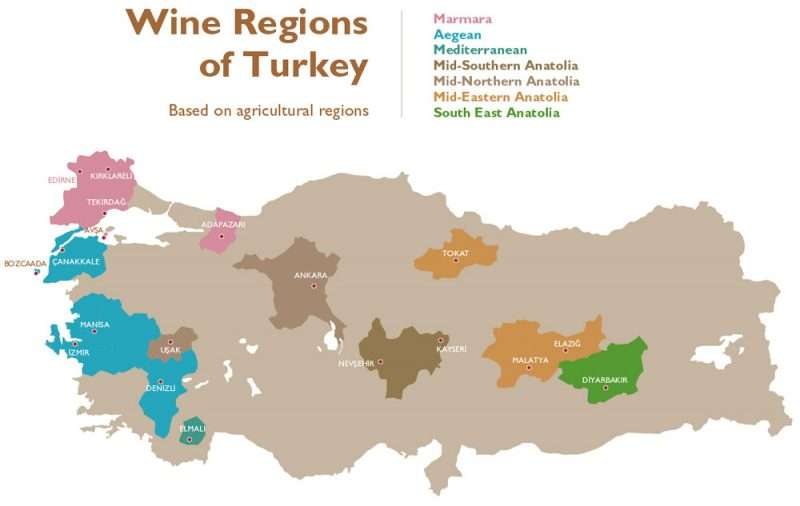 When one thinks of Turkey, wine isn’t something that immediately comes to mind. Rather a wonderful fusion of Eastern and Western cuisine, a very rich cultural history that stretches back thousands of years and products like luxury leather goods, traditional carpets and stunning ceramics.

And, of course, other well-known tourist attractions like Homer’s legendary city of Troy with its famous Trojan Horse; Ephesus, one of the world’s finest archaeological sites; the pools of Pamukkale and the underground cities of Cappadocia.

But you’d be wrong to write off the Turkish wine industry. This country with one foot in Europe and the other in Asia across the Bosphorus Strait has an ancient winemaking history dating back millennia, well before the classic civilisations of Greece and Rome helped to cement the popularity of wine as a cultural cornerstone. But it’s only recently that Turkey’s wine industry has grown sufficiently to become recognised internationally.

Like Italy, Turkey benefits from a vast number of indigenous grape varieties, although many of the varieties are unknown to wine lovers beyond Turkey’s borders. Varieties such as kalecik karasi and narince, occasionally blended with international varieties, appear on many labels and really showcase the diversity on offer.

Turkish wine is even picking up awards, and rightly so – the many regions and sub-regions are developing individual identities, with Thrace, the Aegean Coast and Cappadocia producing the highest quality wines.

Curiously, although Turkey is one of the world’s biggest grape producers, only a tiny percentage is used for winemaking, the majority being grown for table grapes.

“Promotion of alcohol has been illegal since 2013, encompassing everything from advertising to wine tastings,” explained Ali John Seden, a local wine expert I met through our Insight Vacations tour director. “This has stalled the wine industry’s domestic growth and so many producers are now seeking success in international markets.”

Trying to find a wine list in many, if not most, restaurants in the country is an exercise in utter futility and frustration. Fortunately the hotels we stayed in during our recent visit were more “tourist friendly” and I managed to sample a few of the indigenous wines. I was not disappointed!

Ali told me that Mustafa Kemal Atatürk, Turkey’s first president, established the country’s first commercial winery in 1925. According to the International Organisation of Vine and Wine (OIV), the total wine production in 2005 was 287,000 hl. In the first half of 2009, wine consumption in Turkey reached 20,906,762 litres.

It is estimated that Turkey is home to between 600 – 1 200 indigenous varieties of Vitis vinifera, though less than 60 of these are grown commercially. With over 1,500,000 acres (6,100 km2) planted under vine, Turkey is the world’s fourth-leading producer of grapes for wine production.

Ali explained that the size and geography of Turkey account for the wide climatic variation of the country’s wine regions. “The wine region of Thrace along the Sea of Marmara has a slight Mediterranean climate that resembles those of neighbouring southwest Bulgaria and northeast Greece. This area is responsible for nearly 40% of Turkey’s wine production, which also produces the most elegant and balanced wines in Turkey. The sub-region of Thrace, Kirklareli, is known for its crisp white wines and fine reds.”

According to him the wine regions along the Aegean coast, mostly near Izmir, account for 20% of the country’s wine production and have a much more pronounced Mediterranean climate with mild winters and warm, dry summers.

“The remaining portion of Turkey’s wine production takes place in scattered pockets throughout the Eastern and Central Anatolia regions. The region of Central Anatolia is the most climatically difficult region to produce wine with most vineyards being located at altitudes near 1 250 meters above sea level. Winter frost is a serious viticultural hazard, with winter temperatures often dropping to −25ºC. In the summer, grapes of this region can receive up to 12 hours of sunshine a day.

“The vineyards of Eastern Anatolia around Elaziğ, Malatya and Diyabakir are located in the Euphrates valley, which is one of the world’s oldest wine regions and the anecdotal location of Noah’s vineyards from the 9th chapter of Genesis.”

It’s said the largest winery in Turkey is operated by Tekel, which started out as a state-owned monopoly. Other notable wineries include Sarafin on the Gallipoli peninsula in Thrace, which was Turkey’s first privately owned boutique winery, Doluca, also in Thrace, and Kavaklidere near Ankara. Pamukkale Winery also makes wine, while Sevilen Winery produces ten million bottles a year. The newest winery in the Aegean region is La Organik which makes wine from organic grapes and in their first year won international acclaim in Decanter magazine.

Our Insight Vacations trip took us through four of the country’s wine-producing regions, namely Marmara, Aegean, Mediterranean and Mid-Northern Anatolia.

From Istanbul we drove along the shores of the Sea of Marmara to the Peninsula of Gelibolu (better known as Gallipoli), took a ferry across the Dardanelles Strait to Çanakkale and drove on to Troy, Pergamon and Izmir. Ancient Ephesus and Kusadasi were followed by the spactacular Pools of Pamukkale, and then it was on to Konya where we saw the famous Whirling Dervishes. The out-of-this-world landscape and underground cities of Cappadocia kept us enthralled before we travelled on to Ankara, and then back to Istanbul.

But back to wine!

Marmara designates a region spread over southern Bulgaria (Northern Thrace), northeastern Greece (Western Thrace) and northwestern Turkey. It borders on three seas, the Black Sea, the Aegean and the Sea of Marmara, and has a typical Mediterranean climate with hot summers and mild winters. Marmara accounts for about 14% of all wine produced in Turkey.

This region lies in the western part of the country and faces the Aegean Sea and Greek islands. It also has a typical Mediterranean climate with hot summers and mild winters. This region produces about 52% of Turkey’s wine.

Located in southern Turkey and facing the Mediterranean Sea, this region accounts for less than 1% of the country’s wine production. Needless to say, it has hot summers and mild winters.

After visiting the mind-blowing underground cities of Cappadocia in the centre of Turkey, we returned to Istanbul via Ankara, the country’s capital, a drive that took us through this wine region which consists of two separate areas, namely Ankara and Uşak. Uşak is in the west of this region and Ankara is in the more northeastern part.

This region, which produces only about 4% of the country’s wine, has a continental climate with hot summers and cold winters and is home for varieties like kalecik karasi, boğazkere, öküzgözü and shiraz.

According to Ali the local market is dominated by 3 major producers, Kavaklidere, Doluca and Kayra, and that smaller wineries are concentrated in the Aegean Region and Thrace. In the other wine-producing regions there are very few wineries that produce quality products, according to him.

“Among the white wines, narince is the most important grape variety. Emir is the second most important white variety. The most promising indigenous red variety is oküzgözü from Eastern Anatolia.”

I asked Ali to recommend a few wines for me to sample and this is what he came up with.

“The çalkarasi grape is native to Çal in south-western Turkey, 850 metres above sea level on red loam and rocky soils. It is really spectacular. It has a beautiful balance of acidity and freshness, with light red fruits on the nose and an almost mineral finish.

“Pasaeli, founded by Seyit Karagözoglu in 2000, was a real discovery at a Wines of Turkey tasting in London with wines from both international and indigenous varieties showing real personality. This is a blend of 82% karasakiz (which translates as black chewing gum) and 18% merlot.”

Ali told me wines from kayra have been made for the past decade by Californian consultant winemaker Daniel O’Donnell, who sees this variety (commonly referred to as KK) as the pinot noir of Turkey. This is 50% whole-fruit fermented giving lovely purity of sappy red cherries, great freshness and a perfumed lift.

“Narince was first made as a varietal wine by Kavaklidere, and grapes for this come from the prestigious Cotes d’Avanos vineyard, as well as plots in Tokat. It is fermented in oak barrels and then aged for nine months on its lees, giving a rounded, creamy palate of yellow fruit.”

Based on Avsa Island in the Marmara Sea, Büyülübag farms 20 hectares on sandy loam soils, vinifying its grapes in a modern gravity-fed winery. Ali says this bone-dry rosé is made from the adakarasi variety only found on Avsa. It has a mouthwatering acidity and juicy, ripe red berry fruit.

“Buzbağ is a full-bodied red wine with high tannic levels made from boğazkere grapes grown in the Anatolia region. It is sometimes produced in an ice wine style with the grapes allowed to hang on the vine till the first frost and then crushed while the grapes are still frozen. Historically, the area where Buzbağ is produced is considered a possible birthplace of wine. The biblical accounts of Noah after the flood has him planting a vineyard near the area where the ark landed. This area is presumed to be Mount Ararat where Buzbağ is still being produced today by the state-run vineyards of Tekel near the town of Elaziğ next to the Euphrates River.”

Finally, Turkey is well worth a visit, even if you have to dig deep to find its many wine jewels! But once you’ve found them, you’ll be glad you’re on the wonderful journey into wine! And besides, the country has so much more to offer the visitor.