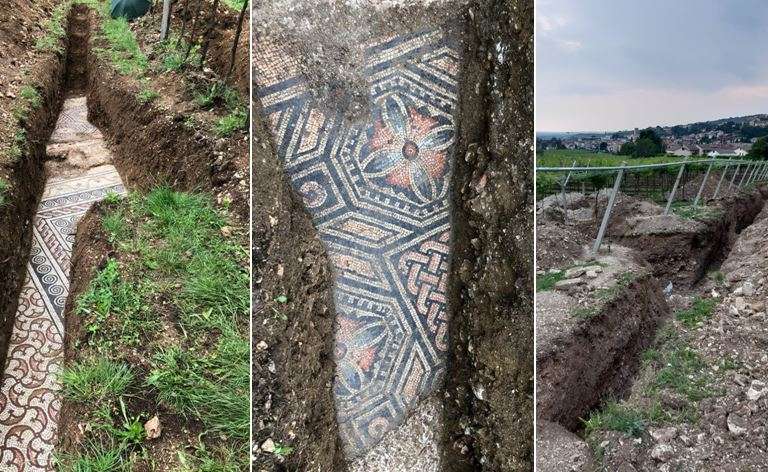 A perfectly preserved ancient Roman mosaic floor has been discovered near the northern Italian city of Verona.

Archaeologists were astonished by the find as it came almost a century after the remains of a villa, believed to date to the 3rd century AD, were unearthed in a hilly area above the town of Negrar di Valpolicella.

After the discovery in 1922, the site was mostly left abandoned until a team from the Superintendent of Archaeology, Fine Arts and Landscape of Verona resumed digging last summer. The team returned to the site in October and again in February before the excavation was suspended because of the coronavirus pandemic.

The mosaic was found a few metres beneath a row of vines a week after work got going again.

“After countless decades of failed attempts, part of the floor and foundations of the Roman villa located north of Verona, discovered by scholars a century ago, has finally been brought to light,” authorities from Negrar di Valpolicella wrote on the town’s Facebook page.

“The superintendent will now liaise with the owners of the area and municipality to identify the most appropriate ways of making this archaeological treasure, which has always been hidden beneath our feet, available and accessible.”

Roberto Grison, the mayor of Negrar di Valpolicella, told the local newspaper L’Arena: “We believe a cultural site of this value deserves attention and should be enhanced. For this reason, together with the superintendent and those in charge of agricultural funds, we will find a way to make this treasure enjoyable.”

Paving stones dating back 2,000 years were also discovered after a sinkhole opened in front of the Pantheon in Rome during the coronavirus lockdown.

The seven travertine slabs were found 2.5 metres beneath Piazza della Rotonda. Although sinkholes are a common problem in Rome, fortunately the usually packed square was empty at the time the pavement collapsed in April.

Italy’s cultural sites are slowly coming back to life, with the archaeological park of Pompeii reopening on Tuesday. The park reopened with security measures in place, including temperature checks, while the entrance price has been reduced to €5.

The Colosseum will reopen on 1 June, with visitors obliged to buy tickets online, wear face masks and have their temperature checked before entering.