An Insider’s Guide to a World-Famous German Wine Region 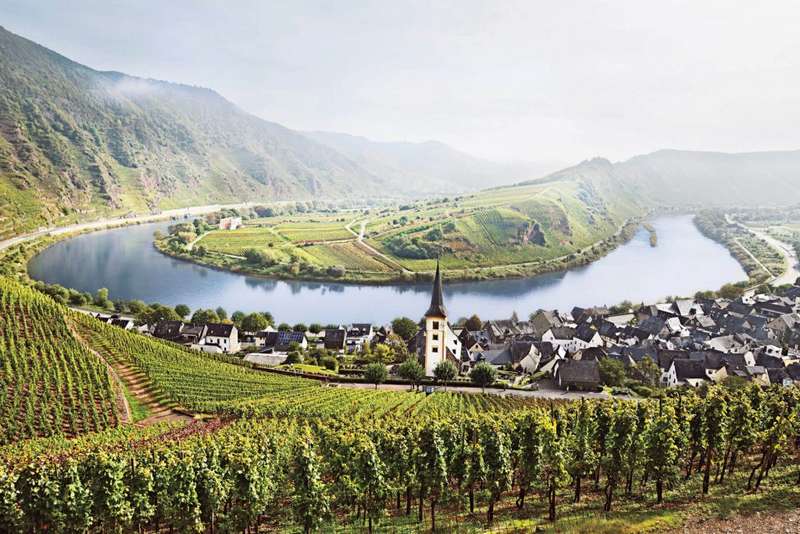 Of Germany’s 13 regions for quality winemaking, the Mosel may be the most renowned. Known for age-worthy riesling and terraced vineyards along the Mosel, Saar and Ruwer rivers, the Mosel has produced memorable, important wines for centuries.

Near Germany’s border with Belgium and Luxembourg, the Mosel is a cool-climate region. The higher-quality vineyards are located alongside the Mosel River and its tributaries, as temperatures can be warmer there. One defining characteristic of the region, besides its rivers, are its soils.

The Mosel is particularly known for its blue and volcanic red slate soils, which provides excellent drainage for grapevines. It’s well suited for a region that sees a fair amount of rainfall.

The slate soils provide excellent conditions, says Dr. Katharina Prüm, co-owner/winemaker for one of the Mosel’s most renowned producers. “The steep soils allow the sun to be caught ideally for the wines,” she says. “And the slate soils allow a very beautiful, salty minerality absorbed by the vines. Also, they can save the heat very well.”

That last part is particularly important for one of the world’s coolest growing climates.

Slate also provides different flavour profiles for the grapes grown in it. “Blue slate is the most common in the region and yields very delicate wines, with primary fruit flavours that tend toward lemon, white peach and green apple,” says Ernst Loosen, owner/winemaker of the Mosel’s esteemed Dr. Loosen. “Red slate tends to produce wines with a darker aromatic profile and a more muscular structure. We can’t explain why, exactly, but we see it every year.”

The Mosel River is often regarded as three sections: the Upper Mosel, the Middle Mosel and the Lower Mosel.

The steep slopes that rise from the banks of the river are, famously, terraced for winemaking. They’re also considered some of the most labour-intensive and dangerous in the winemaking world. Vines are typically staked directly into the ground to help stabilize them. Terraced vineyards have the benefit of sunshine, but one pitfall in wet years is erosion.

The use of machines on the steep slopes is a nearly impossible task, so grapes in the Mosel are hand-picked. These days, however, some modern conveniences have helped make winemaking easier.

The grape of renown in this region is riesling, although other grapes thrive here like elbling and müller-thurgau. Roughly 62% of the Mosel is planted to riesling, which can be made into bone dry, off-dry and even dessert-style wines.

“The Mosel region and riesling are uniquely suited to one another,” says Loosen. “Riesling is a winter-hardy variety that benefits from the Mosel’s cool climate where the grapes can ripen slowly over a long period. Riesling needs long hang time for maximum flavour development. This develops intense flavours without high alcohol, giving Mosel rieslings their signature lightness and finesse.”

The lower alcohol by volume (abv) and higher residual sugar is because full vinification, the conversion of almost all sugar to alcohol, can be challenging with cool climate grapes. Other grapes grown in the Mosel include pinot noir (spätburgunder), kerner, pinot blanc, dornfelder, pinot gris and bacchus.

Most wine scholars believe that the Romans planted the first vineyards in the Mosel around the 2nd century. By the 4th century the vineyards had already been committed to paper by the Roman poet, Ausonius.

“From afar, the vine leaves tremble in the sight of the emitting embers, and the grape glistens swelling in the mirror of crystalline tide,” he wrote of the Mosel, around the year 371. It was not until the Middle Ages that the wine emerged as central to daily life.

By the 18th century, the region had become more closely aligned with riesling. Eventually, Prince Clemens Wenceslaus of Saxony decreed that every vine grown must be riesling. Although that rule fell out of favour, it impacted the overall style of Mosel wine.

Following a series of poor vintages in the mid-1800s, German winemakers were permitted to add sugar to grape must before vinification, a process known as chaptalization. Intended to level the playing field in poor vintages, it had the opposite effect. Americans began to associate German winemaking with sweet, somewhat unserious wines.

Most serious collectors have regarded the Mosel as noteworthy despite this. Chaptalization can still be used, but it’s not permitted in Prädikatswein, the superior quality wine designation established by the German government in 1971. This plays into the important decision of when to harvest grapes.

The different types of German wine

“Riesling shines through its purity, so most winemaking on the Mosel is aimed at preserving the freshness and crystalline purity of the fruit,” says Loosen. The longer grapes stay on the vine, the riper they become. And Prädikatswein is based on ripeness, not the sweetness of the final wine.

Dry or off-dry wines that are around 8–10% abv are called kabinett. The next ripeness level is spätlese, made from grapes that have spent more time on the vine. They will be lighter in body than a kabinett wine.

Auslese wines are hand-chosen from clusters and can have some Botrytis cinerea, the so-called “noble rot.” These wines are typically semi-sweet or sweet and tend to be lower in alcohol.

Beerenauslese, or BA, wines are rare, but not nearly so as the honeyed Trockenbeerenauslese, or TBA, wines. TBA wines come from grapes so affected by botrytis that they dried and shrivelled on the vine, leaving nothing but nectar behind.

Eiswein is perhaps the most coveted treat: wines made from grapes that have frozen on the vine.

In the Mosel, refinement is the point. Winemakers work with what they have, and reach incredible heights as a result.