A new dawn for Stellenzicht Wines

One of Stellenbosch’s most beloved wineries – that once heralded a new era for South African wine – has been transformed. Stellenzicht Wines, situated in the Upper Blaauwklippen Valley in the foothills of the Helderberg Mountain, takes its inspiration from the estate’s ancient heritage and champion pedigree.

Stellenzicht also declares the farm’s dedication to a sustainable future, adopting the dragonfly as an emblem of balance and sensitivity.

The farm was acquired four years ago by Baron Hans von Staff-Reitzenstein, a renowned German wine collector with a passion for South Africa. An experienced wine team was assembled and studies of the soils, ideal varieties and history initiated.

Upgrades were set in motion that included the removal of alien vegetation, re-establishing indigenous wilderness species and an intense focus on the wines. A vine re-planting programme was conceived with the help of renowned viticulturists Dawid Saayman and the late Prof. Eben Archer. The cultivars that were settled on as Stellenzicht flagbearers were shiraz, chardonnay, cinsault and cabernet sauvignon. 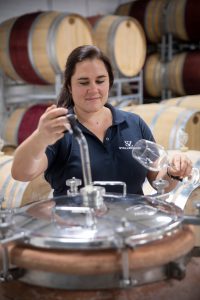 In the process, however, something unusual emerged. Strangely shaped rocks, uncovered on the site as land was prepared, suggested a tale that was even older than the farm’s contemporary history. These rocks were later determined to be Acheulean hand-axes, ancient pear-shaped stone tools named after the French region where they were first discovered.

“It was a lightbulb moment,” says winemaker L’Ré Burger (right), who joined the property in 2017. “Irrespective of changing ownerships and farming activities, the rocks have stood the test of time. Now they speak through the wines.”

From vine to bottle

Preserving this “voice of the land” in the wines has been a founding principle of the new range and was gently borne by the work of both L’Ré and viticulturist Nico Nortje. They emphasised this using traditional vinification methods too. From these vineyards and fine-craft methods, the new portfolio of premier quality wines emerged. 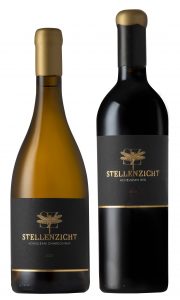 The portfolio now consists of three ranges, with the Acheulean hand-axes becoming the inspiration of Stellenzicht’s new flagship range:

The Acheulean Chardonnay 2020 was fermented in clay amphorae with a portion given time in 500-litre barrels.

The Acheulean Red 2018 is driven by cabernet sauvignon, with the remainder made up by shiraz and a touch of cinsault. 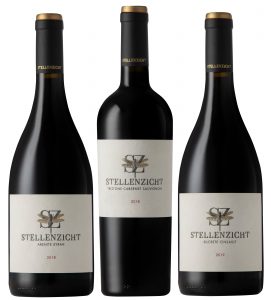 The Arenite Syrah 2018 is named after the stone where the shiraz vineyard was planted. The wine, however, recalls Stellenzicht’s own glorious history. The vineyard was painstakingly cultivated with cuttings from the original vineyard that produced the champion 1994 vintage.

The Tristone Cabernet Sauvignon 2018 showcases the suitability of the farm and indeed the region for great cabernet sauvignon. It is so named because the fruit was harvested at three different sites on the farm.

The Silcrete Cinsault 2019 also refers to a soil type. Although cinsault has been planted at Stellenzicht, this vintage was produced from 28-year-old bush vines at Voor Paardeberg on a farm where the variety truly shines. In the cellar it was whole bunch-fermented to produce a truly alluring wine. 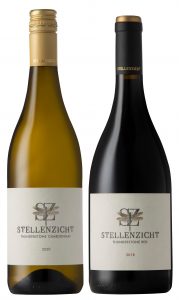 The Thunderstone range is a reference to the name given by early European settlers to the unusually shaped hand-axes found on site, believed to have been created by lightning striking rock – dondersteentjies:

The Thunderstone Red 2018 is a cinsault-driven blend that shows spicy aromas and red fruit.

The Thunderstone Chardonnay 2020 is fruit-driven, and older barrels were used to add creaminess and texture.

A cornerstone of Stellenzicht’s new dispensation is environmental sustainability. Part of this journey has been the establishment of a fynbos garden with the help of a horticulturist. Its purpose is two-fold: to help restore a level of biodiversity on the farm and to provide a seedbank from which other wilderness areas on the farm may be re-established with natural plant species.

It is from these environmental activities that the dragonfly is eternalised in the new Stellenzicht logo. The insects are increasingly observed at Stellenzicht – a positive sign considering their extreme sensitivity to environmental changes.

“To us, the dragonfly symbolises balance in everything we do,” L’Ré says.

Stellenzicht wines are for sale directly from the website and are being rolled out to leading specialist retailers across the country. A visitor experience at the farm is on the cards, although current focus has been on the vineyards and production of exceptional wines.